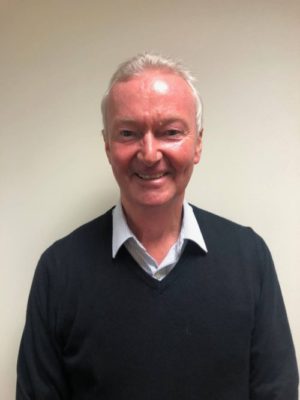 A long-serving and popular member of the Gradient team, Steve Adams, has retired.

Steve, who was National Survey and Technical Support Manager, played a key role in the company’s success for more than 20 years.

Despite having ‘mixed feelings’ about his retirement, Steve said the future held much excitement.

“I’ve greatly enjoyed working with a great many friends and colleagues,” he said. “We shared the experience of working collectively to develop Gradient from a small new company with all of the usual growing pains, to become the market leader within this specialist industry. The time has now arrived, however, for me to move on to my retirement for which I have great plans.”

Dave Bailey, who works for Gradient’s system partner, Alumasc Exteriors, and dealt with Steve on a professional basis for 15 years, said: “Steve’s attitude to work was exemplary. Things always had to be just right, and no shortcuts could be taken with surveying, For example, he wasn’t averse to standing out in pouring rain and getting soaked in order to ensure a job was done properly. He always saw the humour in any project, though. We’ll miss him.”

James Wilkinson, Design Team Leader at Gradient, said Steve’s loyalty was matched by his skill. “He could create a project design and price in a matter of minutes,” he said. ”Steve was an exceptional talent, but very down to earth. He was an asset to colleagues and the company as a whole.”

Rather than put his feet up and enjoy a well-earned rest upon his retirement, Steve said he plans to hit the road and indulge his love of the Great Outdoors. A keen hill walker and cyclist, he’s bought a VW Camper van in order to tour the UK and locate the most scenic trekking and riding locations.

He said: “Later in the year I intend to follow the weather south and travel throughout Europe – if they will still have me!”